OneRamp is a single portal that gives you easy access to all your research administration functions and inspires confidence that you’re meeting federal, state, local and institutional requirements.

Seeing a need to break away from the old, inefficient paper-based system, the University of Nebraska–Lincoln (UNL) identified the need for a research administration system. Initially, the greatest need was for pre-award process. Research showed other existing systems were too rigid and costly to implement. The university decided to build a homegrown system from scratch.

Bolero's co-founder and CEO, Tim Savage, was hired as a UNL employee to lead the creation of its first web-based research administration system. A web developer, Tim dove deep into learning about the research administration process. Along with plenty of reading, meetings, observation and discussions with staff, coding began on NUgrant, now known as OneRamp.

The first module, developed for the Office of Sponsored Programs’ pre-award team, goes live. The release received rave reviews from the staff and administrators. The university’s research administrators and staff envisioned more uses for NUgrant and started developing a long wish list.

The success of the pre-award module brought more work requests to the team. As a result, the Conflict of Interest module is coded and released into production.

What the team calls "EZforms" may not mean much to our customers because it's a back-end tool that our developers use. But after three years of building the system, it was evident that each research support unit had unique processes and needs. NUgrant’s previous success also bred demand for more work, so we needed to find a tool that enabled us to meet that demand in a way that still supported each unit’s process.

"EZforms" provided that ability. The initial concept was successful, and to this day, we continue to refine the tools, now known as "EZforms2. The advent of "EZforms" was an important step to making OneRamp a product that provides value to any client. Its success planted the idea about the system’s commercial potential.

Building to a crescendo

Adding new pieces to the system felt like reaching the crescendo – but we weren't done yet.

After years of discussing how we could sell our product and receiving interest from other institutions, the OneRamp team decided to take steps to form a company and license the technology for commercialization from UNL.

Co-founder Tim, a classical music fan, insisted we call the company Bolero after the 1928 piece written by Joseph Maurice Ravel. He argued that Ravel wrote Bolero to start out small and simple, then continuously added instruments until the piece reached an orchestrated crescendo. We agreed that was a fitting metaphor for the OneRamp story, and the name stuck. The Bolero logo also symbolizes this process.

We convinced the University of Nebraska Omaha that we had a good thing going. Thankfully, UNO agreed, and we began building its customized system.

Creating our own space

By 2017, Bolero had enough clients to become a full-fledged startup and build our own space. We moved to Nebraska Innovation Campus, which has been an ideal place to run a business like Bolero. Being on Innovation Campus lets us keep close ties to the university while having industry and startup support.

We offer pre-built modules to address core research administration needs in these areas:

The OneRamp eRA Suite also features optional sections for sharing funding announcements, managing core facilities, communicating about research and managing events. And we can work with you to customize solutions or create all-new modules to meet your specific needs.

Tools for administrators and for faculty

Deadline and tracking reports to make sure nothing falls by the wayside
Detailed reporting at the institution, college or department level to guide strategic decisions
Metrics to show where processes can be improved

The OneRamp eRA Suite is available 24/7 wherever there’s an Internet connection. Responsive means it's built to work on any device you can throw at it: Android, iOS, desktop PC or tablet. We also follow W3C and web accessibility standards to make OneRamp an application suitable for all users. 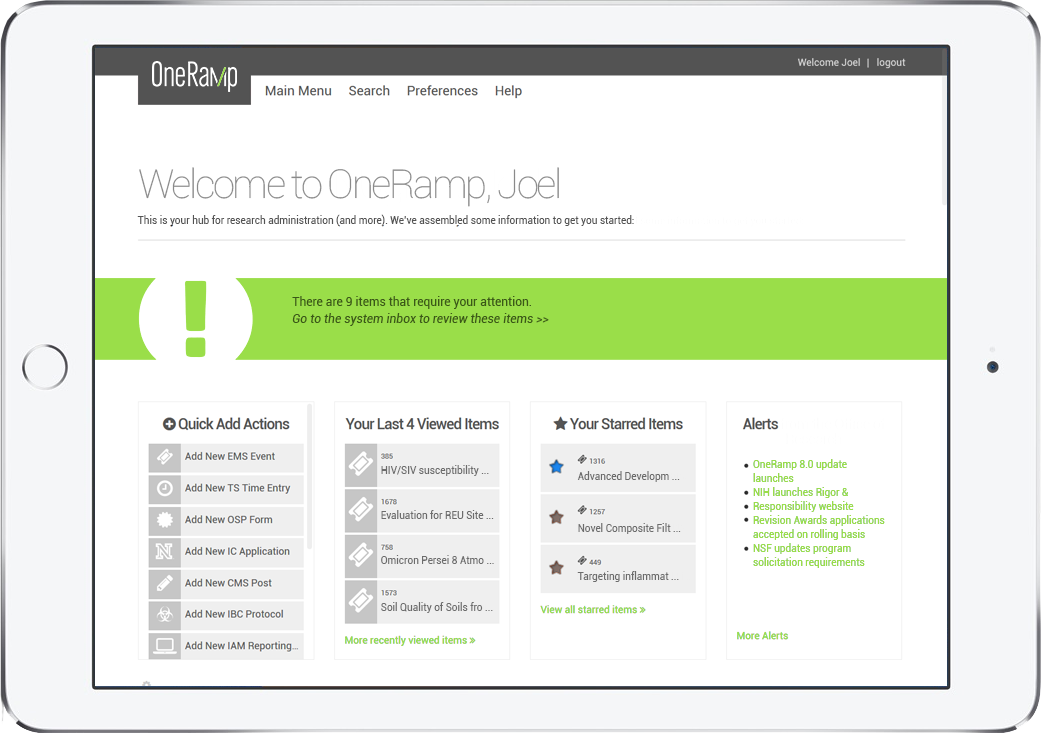 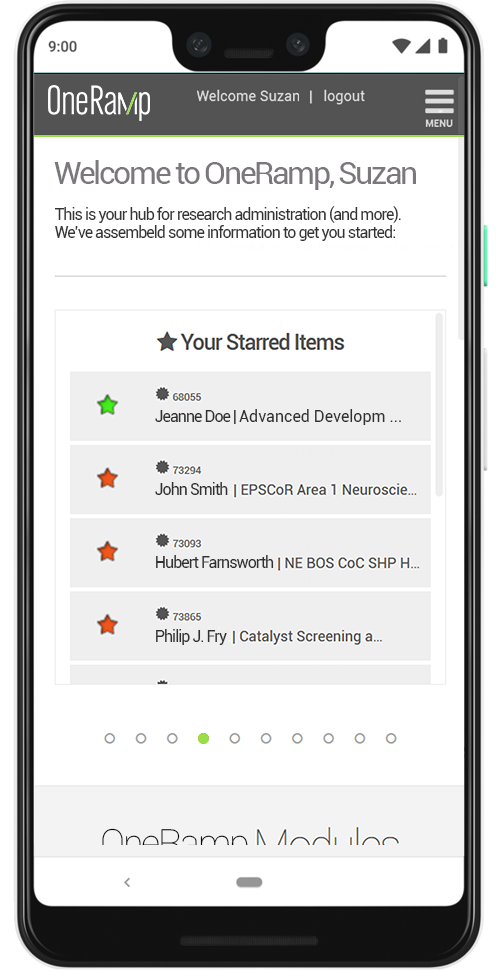 One research administration portal to fit all of your needs

Contact us to learn more about how we can help ramp up research at your institution today.